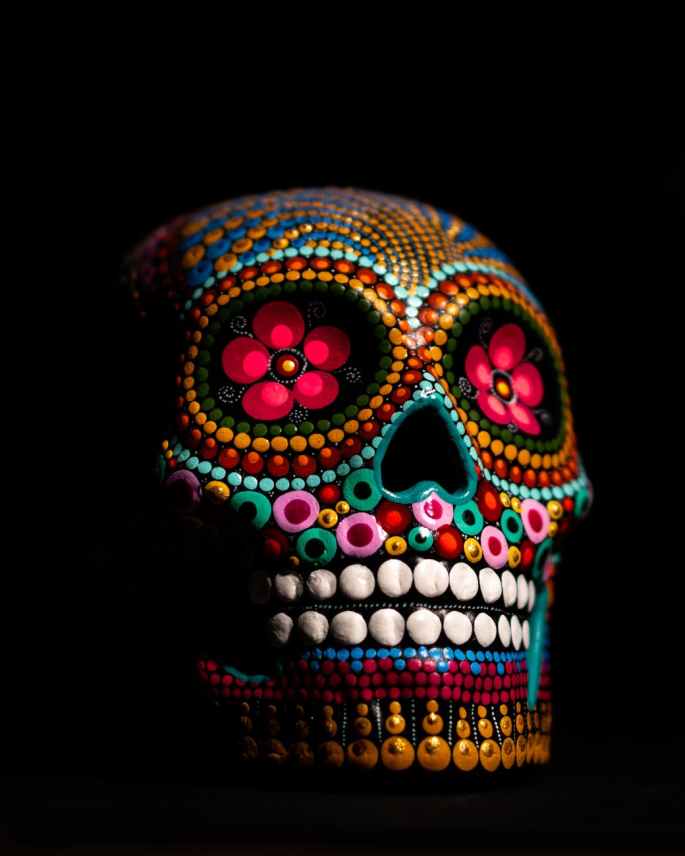 Part 1. Fascination takes a part of me

I was once in a theatre group called the Glass Skull Theatre Company. There wasn’t a direct link between our performances and the name but I had become captivated by a glass skull in the Museum of Mankind (now subsumed by the British Museum) in London’s Bond Street. It didn’t occur then, but I later realised that my interest in the skull was a reflection of a human fascination that has existed for hundreds of years. Skull imagery is as popular in mass culture today e.g. in the world of fashion as it was when Shakespeare’s Hamlet first hit our screens in 1603.

Back in 1985, the crystal cranium was displayed as a genuine Aztec artefact. Now however, it is thought to be one of several 19th century Middle European drawing room objets d’art designed literally as a nod to the mysteries of ancient times.

As something carved from quartz, the skull is clearly not a real. However, it possesses a mystique. Unlike bone, the glass allows light to shine through refracting rainbow shards that poke out like frozen fingers. Its natural fissures resemble the zigzag cracks in human skulls whose jagged brown bloodless crannies resemble a Mediterranean stone wall in which dozing adders stir during their dreams of Eden. The eye sockets offer an indeterminate depth suggesting infinity yet the observer knows the physical socket has a definite end to it. You can touch this end (if you poke his eye) but cannot gauge its true dimensions just by looking.

Mortality haunts human life. It swirls around and saturates us. We instinctively know the visual language of the grim reaper’s skeletal frame in that dark hooded cape and Jolly Roger’s grinning pirate flag telling onlookers; ‘this is what we’ll do with you’. Our gut tells us to what the skull equates and it’s not eternal happiness.

Yet not all skulls have the same effect. Those of animals trigger thoughts of ‘oh, well that’s the circle of life in action’ others become a hunter’s trophy pinned upright and ugly on musty walls. They hover expressionless because they are mere bare bone. Photographer Annie Liebowitz has made a skilful attempt to turn an item of scientific data gathering into art and this piece is challenging and interesting even if it’s not a delight to behold.

The human skull however, activates a very different reaction that is both visceral and sick making. These skulls too have been used as trophies and the bile in the throat taste they leave runs in a direct flick of disgust towards the human heart.

Whether they are shrunken heads of native southern Americans or murdered victims in mass graves, their empty sockets stare at and judge us with the salient reminder: fui quod es, eris quod sum (I once was what you are, you will be what I am).

Part 2. The Ever Circling Skeletal Family

On 16th September 1977, Marc Bolan died. I’ve written about him before and how his music and image had a big effect on me. His untimely death, which coincided with me going into Higher Education, marked the end of summer and a descent into autumn in more ways than one.

Every September I read media reports of a new Bolan/T.Rex revival but somehow in this oddly twisted year of 2020, it feels like it could actually be true. Here’s evidence.

I was attracted to Marc because his obscure lyrics somehow made sense to me. I felt ‘clever’ because I could get into his words and poetry that others wouldn’t grasp. His references to writers like Baudelaire and Kahlil Gibran opened up new channels of poetry and I was hypnotised by his ability to juxtapose imagery. In this example he creates something of beauty by adding bling to the Skelton’s head:

Spun in lore from Dagamoor ~ The skull of jade was pearl inlaid ~ The silks, skin spun, repelled the Sun ~ A tusk of boar with dwarfish awe ~ Sobs on the door where stood before (from Cat black the wizard’s hat).

I have been researching the rituals and beliefs of ancient Central America including Dia De Muertos (day of the dead) and how it celebrates, rather than mourns, the lives of the deceased. The human skull is the central image. Yet and like Marc’s lyrics above, the skulls are not deathly dry bones but brightly decorated masks and models all designed to tell death that we humans are not scared but ready to embrace life post life.

One of Marc’s most touching early songs is Frowning Atahuallpa (My Inca Love).

Atahuallpa was a key character in South American history and was to all intents and purposes the last Inca. As the final leader of what had been an ancient civilisation he was killed by the Spanish invaders in 1533. His legacy in death was far reaching. He represented the end of so-called Paganism (The Incas were sun worshipers which the church managed to spin as somehow inferior to their tranche of murderous monotheism) and an effect of his execution was that tales of him resurrecting Christ-like spread across the region thus enhancing his semi-god image.

I have no idea what Marc knew about central/southern American history but in addition to these Inca and Christians religions his quaint song also mentions Ra (the Egyptian Sun God) and Hare Krishna. That’s four belief systems referenced in one ditty, now that’s creative song writing!

And creativity is where we end. The human brain is a finite mushy object in a delimited bony box. However, the creative person ignores limits. It is as if imaginative people like writers, biologists and the aforementioned Annie, have glassy skulls whose open jaws imbibe flutes of white liquid light then fire them out of their minds like wonderful squibs in bright and infinite directions.

I come from a time where the burning of trees was a crime ~ I lived by a sea where to be was a thing of true joy ~ My people were fair and had sky in their hair ~ But now they’re content to wear stars on their brows ~ Frowning Atahuallpa (My Inca Love).

I know something is very wrong ~
The post returns for prodigal songs ~
With blackout harks with flowered muse ~
With skull designs upon my shoes ~ I Can’t Give Everything Away from Blackstar, David Bowie’s last song.